Workers are needed for the construction of buildings, the extraction of resources, the manufacture of objects in the camp. In this guide, we will consider the method of obtaining, increasing the level and characteristics of workers.

The way to get workers

The first two workers are given out on the plot purple quest when they introduce the player to the Camp. The following workers need to be hired at the Pub. 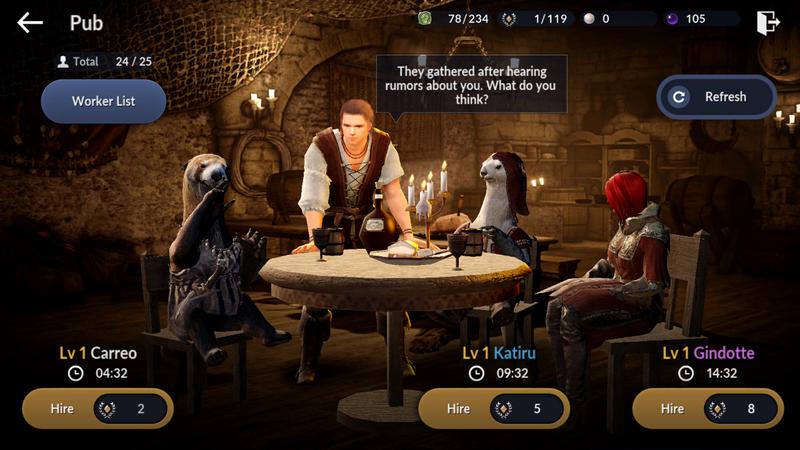 The Pub menu contains 3 random workers of the 1st level of different rank. Before hiring one of them, you can familiarize yourself with its price, rank and characteristics. When buying workers, сontribution points are spent, which are obtained only by quests and in very small quantities. Important! Before buying, correctly calculate the сontribution points so that it is enough for all workers. Below you can find the price of each worker.

The maximum number of workers depends on the amount of lodging in the camp and the level of the Town Hall.

When buying a worker, it is important to pay attention to 3 main characteristics of the worker: Vitality, Strength and Dexterity. Which of these indicators is higher, that will be the main one and will increase much more than the rest with an increase in the level.

In addition to the main characteristics, it is important to monitor two more Loyalty and Fatigue.

Important! With high fatigue, Loyalty is consumed much faster. (when sending a worker to work with a red smiley of fatigue, 5 loyalty will be lost, With a purple smiley 10 loyalty)

Gifts for workers - With the help of gifts you can increase Loyalty, reduce fatigue and also pump the level of workers. Gifts can be obtained when killing monsters or bought in the city at the gift store. 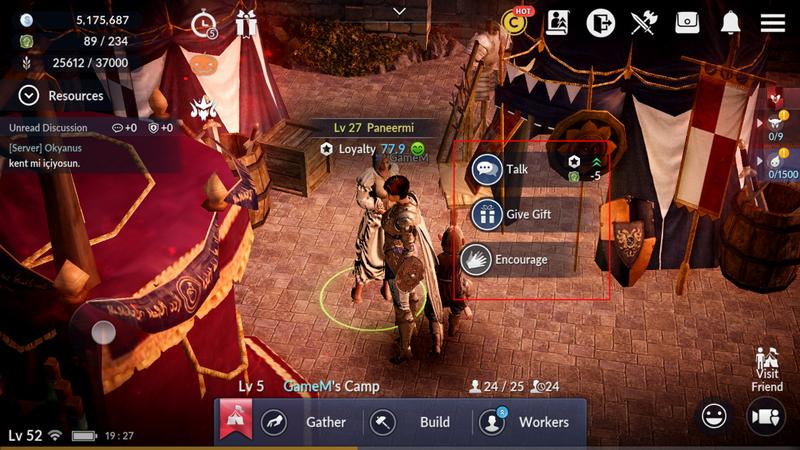 Other functions of workers

Workers can change the name. Names may be the same for several workers at once..

The amount of experience gained when sending workers to gathering resources:

The best way for the worker is to send workers to a regular hourly fee. Worldwide resource gathering brings significantly less EXP.

At the initial stage of the game, due to the small number of contribution points, it is not worth acquiring high-ranking workers.

All workers should be about the same level. To come from the fees at the same time. Adjust level by giving gifts to low-level workers.

At the start of the game, deposit points will be needed to acquire relics. I have 119 contribution points at level 52, 40 are worth a relic, 79 I can afford to spend on workers, I have 25 jobs for workers, the maximum that I can afford is 23 green workers and 2 blue ones. Having bought a gold or purple worker, I will have to sacrifice something, either a relic or the number of workers. But 4 green workers are better than one gold.

The extraction of resources is important at the start of the game, I took all my workers with a high Vitality indicator since they are engaged in the collection most of the time. It may be worth picking up 3-5 workers with maximum performance for building and creating items, but most should be focused on collecting resources.

Renaming workers. I renamed all the workers depending on their second characteristic, as I wrote above I have all the workers with the maximum Vitality indicator, but here the second indicator for some workers is Strength for others, Dexterity, and here to divide them and know who to send to create objects whom to build a building, I renamed them. The names for each category are the same. At any time, I can rename them somehow differently. For example, trade will be introduced in the future, there you will need to select 4 workers who will constantly engage in it.